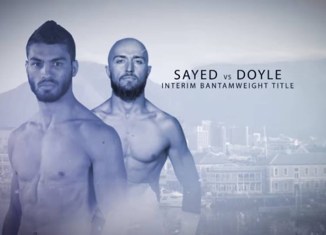 It’s Time.. Fight week has arrived in the Mother City. On Friday 22 April, EFC48 at Grandwest Casino sees a stacked fight card with 2 championship titles on the line.

Co-main event we see home town favourite and number one contender Irshaad ‘White Tiger’ Sayed taking on former contender Cedric “The Dominator” Doyle for the interim bantamweight title after current undefeated champ Demarte “The Wolf” Pena could not agree terms with the EFC. This does not bode well for Doyle as it has infuriated Irshaad who will be looking to deliver a fight of the night performance to send a loud and clear message to Demarte that he is coming. Irshaad, coming into the fight with Doyle a clear favourite on a 7 fight win streak, knows the biggest mistake any fighter can make would be to underestimate an opponent. And with hard hitting, Doyle, who had Pena in trouble in the early stages of their EFC 41 fight, which he ultimately lost by unanimous decision, he will most certainly feel that he has what it takes to defeat Irshaad. The interim bantamweight title fight will be a fight not to be missed, with most pundits predicting it will not go to the judges – someone is going to be finished!

Former lightweight champion and Cape Town local, Don Madge faces Tyson Chelin in what is sure to be a stand up war with both athletes blessed with great technique and strikes, another fight or performance of the night contender. Also on this stacked card, Mark Hulme takes on DRC’s undefeated Kaleka Kabanda and Sibusiso Mdoko faces Hanru Botha.

With a fight card of this magnitude, fans can expect to witness great battles in the hexagon.

Be sure to check back for a recap of fight results.