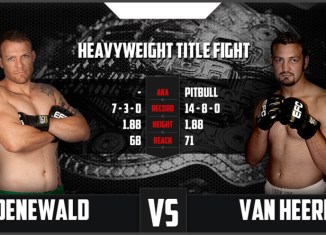 It’s Time.. Fight week has arrived in the Mother City. On Friday 22 April, EFC48 at Grandwest Casino sees a stacked fight card with 2 championship titles on the line.

And now.. The Main event of the evening sees former heavyweight champion Brenden Groenewald as he looks to reclaim the now vacant heavyweight title following the departure of Cyril Asker to the UFC. Standing in his way is the hard hitting and one of the most experienced athletes within the EFC, Danie “PitBull” van Heerden. Currently on a 3 fight win streak, Pit Bull will be doing what he does best and what fans love seeing from him – moving forward and throwing down… throwing down BOMBS. By his own admission Brenden approached his fight with Andrew ”One Gear” van Zyl with the correct game plan but not following said game plan, got caught with some powerful punches. With his outstanding ground game we will most definitely see Groenewald execute his excellent BJJ. A fight that sees two hungry heavyweights willing to put everything on the line, could well be a fight that ends by quick KO or by silky smooth submission – no judges required for this one.

Former lightweight champion and Cape Town local, Don Madge faces Tyson Chelin in what is sure to be a stand up war with both athletes blessed with great technique and strikes, another fight or performance of the night contender. Also on this stacked card, Mark Hulme takes on DRC’s undefeated Kaleka Kabanda and Sibusiso Mdoko faces Hanru Botha.

With a fight card of this magnitude, fans can expect to witness great battles in the hexagon.

Be sure to check back for a recap of fight results.