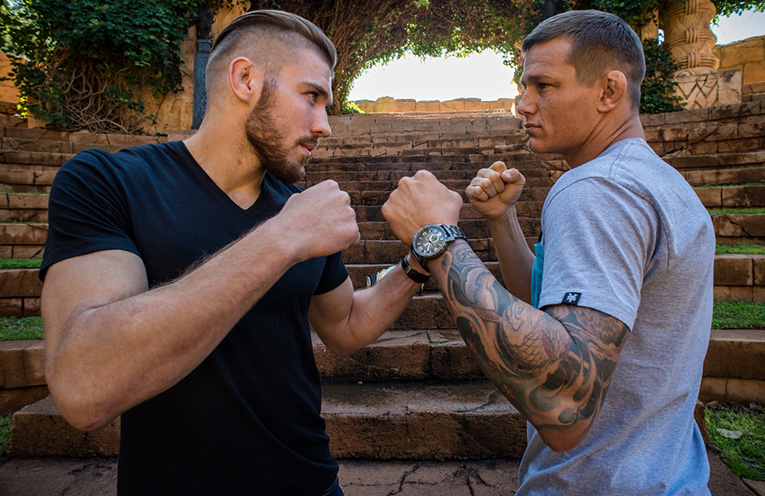 It’s Friday 17 June 2016 and the EFC delivered once again. Reaching their milestone 50th event held at Sun City which delivered on all the hype, when Dricus ‘Stillknocks’ du Plessis was crowned the new EFC welterweight champion.

The main card which was stream live on Kwese Sport, was Chad ‘Superman’ Hanekom taking on Ireland’s Cian ‘Kong’ Erraught. A fight that could well have been fight of the night. Both former rugby players making the switch to MMA landed some big shot and huge takedowns in the opening round and continued in similar fashion into the second. With just under 2 minutes to go, Chad defeated Cian ‘Kong’ Erraught  by way of Rear-Naked Choke, winning his second straight EFC fight.

Former EFC heavyweight champion Ruan ‘Fangzz’ Potts took on the DRC giant, Vandam Mbuyi. Both fighters taking their time to engage, which lead to a few boo’s from the Sun City crowed, until the referee stepped in and told the fighters we need more action. Fangzz was first to engage with few punches and a high kick before taking the fight to the ground, the former two-time champion made quick work of Vandam on the ground getting the W with an Armbar. Signifying his intent to get back into contention for the gold strap.

A late replacement Gordon ‘Rage’ Roodman took on ‘The Polish Tank’ Rafal Haratyk in the 3rd fight of the main card. An action packed start as both fighter landed quality shot in the exchange, it was however Haratyk landed a straight punch on the jaw of Roodman dropping him in the process and forcing the referee to call it. On a three fight winning streak, Haratyk will surely fight for a top contender shot soon.

As mentioned in the preview, a milestone event will not be complete without a ladies bout, Shana ‘Titanium’ Power vs the Italian Micol Di Segni in a fight that went the distance. In classic FFM fashion a very strategic game plan from Power and for all 3 rounds used her reach to keep Di Segni at distance. Power went to what we’ve decided to be her signature move the spinning back fist, which she attempted by our count close to 6/7 times during the fight, sure to be a MMA record. Although Di Segni, kept pushing the pace and continued to move forward is was Power with the unanimous decision victory.

Martin Van Staden very uncharacteristically, immediately shot for the take down from the opening bell and managed to control much of the first round. Start of the second both trade a few shots before Du Plessis landed a right cross that lead to a takedown. Both Van Staden and Du Plessis showed some great grappling, with both attempting submissions. Most entertaining was both fighters attempting the D’Arce Choke before Stillknocks secured a Guillotine Choke which Van Staden had no answer to and a new welterweight champion was crowned.

Chad Hanekom defeated Cian Erraught via Rear-Naked Choke 3:26 in round 2.

Ruan Potts defeated Vandam Mbuyi via Armbar 4:06 in round 1.

Rafal Haratyk defeated Gordon Roodman via KO 4:44 in round 1.

EFC 51: Mynhardt vs Mazany, Kabesa vs Botha, presented by SUPABETS, takes place on Friday 15 July at Carnival City, Joahnnesburg. Tickets are on sale at www.computicket.com, all the main card bouts will be broadcast live on kwesesports.com starting 20:00 (CAT) and delayed live on e.tv after the 20:30 (CAT) movie.