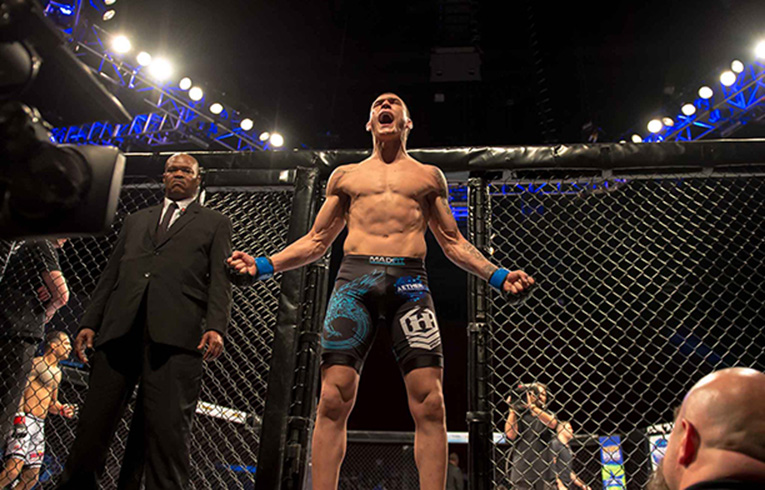 Grand West, Cape Town – And the EFC delivered AGAIN. A Sold out crowd played host to a great night of fights with hometown favourites Don Madge and Champion Dalcha both securing victories.

In the co-main, DRC powerhouse, Champion Dalcha took on the hard hitting Tumelo Maphutha for the interim light heavyweight title. The fight was built up to be a contender for fight of the night but sadly did not live up to the hype. Dalcha dominated for most of the the fight with his trademark takedowns but could not finish Tumelo. “The Truck” on the other hand promised to KO Champion in the lead up to the fight but did not let his hands go. On the up side, he did show a much improved ground game. A unanimous decision victory for Champion Dalcha left the Cape Town crowd dancing and singing. Setting up a potential unification bout with Norman Wessels.

The main event of the evening saw “The Magic Man” Madge face former team mate and trainer, Brazilian Jadyson Costa. A massively hyped fight that hollywood script writer will be proud of, with the build up ultimately boiling over when Costa attempted a take down when the 2 athletes faced off after weigh-ins. Costa showed his intent early in the first round knocking down Madge with a left hook that sent the fight to the ground where the BJJ black belt secured a great position on the ground and came extremely to sinking a choke. Madge managed to defend and secured a dominate position within Costa’s guard and stated to rain down some nasty GNP. Leaving the referee no choice but to stop the fight, handing Madge a TKO victory and possibly setting up Dave “The Pain Train” Mazany first title defence, a fight Don was very vocal about in his hexagon interview with Dirk Steenkamp.

EFC 53: Bahati vs Buirski, presented by SUPABETS, and takes place on Friday 2 September 2016 at Carnival City, Johannesburg. Tickets are on sale now at www.computicket.com, and the 5 main card bouts will be broadcast live on kwesesports.com starting at 20:00 (CAT) and delayed live on e.tv after the 20:30 (CAT) movie.