Skip to content
You are here
Home > EFC > EFC53 Preview 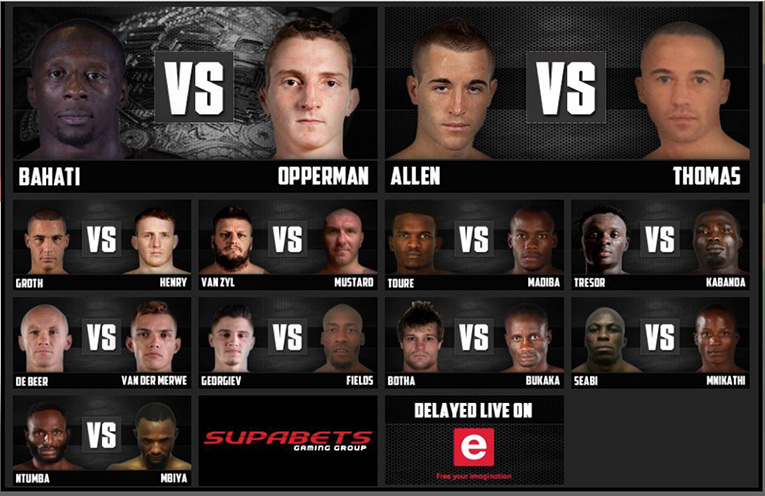 Johannesburg, South Africa – Friday 2 September 2016, Carnival City, Johannesburg will play host to an action packed night combat sports action when Team UK squares off against Team SA (not quite the team sport, but you guys get it) for the 53rd instalment in the EFC.

Yannick Bahati aka Black Mamba fighting out of Birmingham, England is a fighter that finishes his fights, with a 6-1 record, all by finish apart from 1. Is set to take on the former welterweight champion, The Dark Horse, Michiel Opperman after CIT team mate David Buirski had to pull out of his title challenge at middle weight due to a knee injury. The Black Mamba, a powerful and explosive fighter will be looking to stamp his dominance on the division. Yannick’s stand up may have been exposed in his fight with JP Kruger but has predicted a KO victory over Michiel Opperman. Underestimating Michiel could cost Yannick dearly, who is a former welter weight champion, tough and durable. Michiel will be looking to secure the victory any way possible and in the process re-establish himself within the organisation. – Our Prediction: Black Mamba by SUBMISSION

Former featherweight champion, Boyd Allen takes on Welsh commonwealth boxer Azi `One Bomb` Thomas in what promises to be a great stand up battle as both fighters possess some great striking. Boyd, with 9 of his 14 victories coming by way of submission is definitely no slouch on the ground. As his nick name suggest, One Bomb only needs on good punch with a 6 and 2 record, has a 3 and 3 split KO/TKO vs Submission average. – Our Prediction: Boyd Allen by TKO.

The man who holds a victory over Boyd Allen, Scotland`s Danny Henry, is back on SA soil and is set to face off against top contender Wade Groth. Henry a good all round, technical fighter will be looking for any holes in Wade’s game and will want to exploit them. Wade Groth renowned for fight of the night performances will do much of the same. Our Prediction: Danny Henry by SUBMISSION

EFC fight card will not be complete without the big boys. No surprise, Her Majesty the Queen has sent undefeated, hard hitting, Tony `Oosh` Mustard to face, former two-time heavyweight champion Andrew `One Gear` van Zyl. In what promises to be a slug feast or in the words of Andrew `One Gear` van Zyl, “it’s gonna be a banger” – no judges required for this one, someone is getting starched – Our Prediction: Andrew van Zyl by KO

Tickets are on sale now at http://www.computicket.com, and the 5 main card bouts will be broadcast live on http://kwesesports.com (Sub-Saharan Africa) and Kwesé Free Sports (Kenya) starting at 20:00 (CAT) and delayed live on e.tv (South Africa) after the 20:30 (CAT) movie.