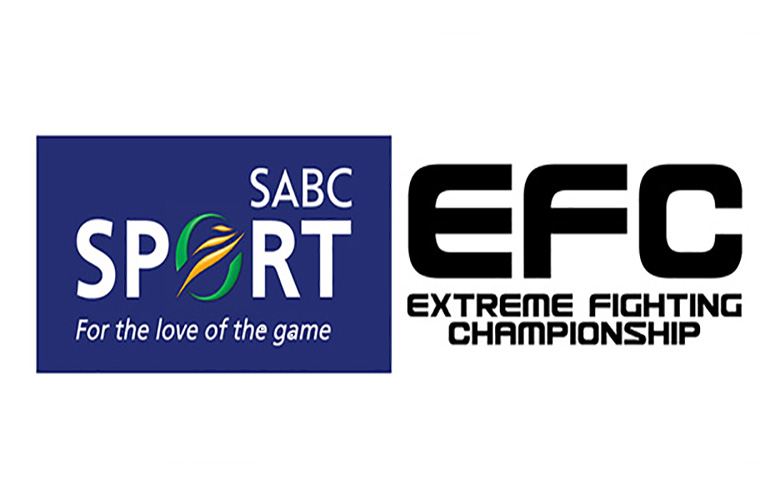 EFC has had continued growth since its inception, from a local MMA promotion to one of the world leaders, reaching over 600 million homes in 110 countries around the world daily. SABC Sport has partnered with EFC to bring the sport even closer to South African fans.

“Over the years, SABC Sport has been committed to bringing top local and international sports properties to viewers across South Africa,” stated SABC Sport’s Group Executive, Sully Motsweni. Motsweni continued, “I am proud to announce that SABC Sport has partnered with EFC, a home-grown world-leading Mixed Martial Arts organisation.”

The new partnership will see hours of dedicated EFC programming every week on SABC 3, as well as 10 live EFC event broadcasts per year. Starting 11 February, SABC 3 will broadcast 2 hours of exciting EFC programming every Saturday evening from 21h00. The best bouts from the Extreme Fighting Championship will be featured along with premium programming building up to each new live EFC event. On the evening of every EFC event, SABC 3 will broadcast the full 3-hour live event, featuring the 5 main-card bouts.

“This is a massive day for mixed martial arts and EFC fans across South Africa,” stated EFC President Cairo Howarth. “Now Saturday nights have got a whole lot more exciting thanks to SABC Sport!” Howarth added, “This is a huge milestone for EFC, its partners and the EFC athletes, who will all be showcased to millions of SABC 3 viewers every Saturday night and repeated on Monday afternoon. Exciting times for MMA!”

Notable highlights of the new broadcast partnership include:

“The SABC has always prided itself in producing and promoting the best home-grown television productions as well as bringing the best international sport and entertainment to local viewers,” stated SABC Spokesperson Kaizer Kganyago. He continued, “EFC events are hosted across South Africa, and appeal to a wide local audience. We are very proud to be promoting the sport in the different provinces and bringing all the top-quality EFC programming to SABC.” Kganyago concluded, “Starting 11 February, Saturday nights will never be the same again!”

The fight announcement was followed by an open workout with the EFC 57 main event athletes, the undefeated featherweight champion, Igeu ‘Smiley’ Kabesa, and the former champion and challenger, Boyd Allen.

All eyes now turn to EFC 57: Kabesa vs Allen, Zulu vs Buys on Saturday 4 March 2017 at Carnival City, Johannesburg. Tickets are on sale soon at www.computicket.com, and the 5 main card bouts will be broadcast live on kwesesports.com (Sub-Saharan Africa), Kwesé Free Sports (Kenya & Rwanda) and live in South Africa on SABC 3 starting 21:00 (CAT). Full broadcast details available on www.efcworldwide.com.

About SABC Sport
SABC Sport head office is based at the SABC Headquarters in Auckland Park, Johannesburg.
SABC Sport is a free to air SABC broadcast division, broadcasting sport to South Africans on SABC TV channels and SABC radio stations.
Weekly, SABC Sport covers live sport action and sport magazine shows ranging from a wide scope of sporting codes not only limited to football, cricket, boxing and rugby.
Broadcasting to over 30million audiences weekly, SABC Sport is able to reach audiences in the language of their choice on any of the 19 SABC Radio stations.
For more information and latest schedule updates, follow us on twitter @sportatsabc and find us on Facebook at facebook.com/sabcsport